Last week my Facebook account got hacked. I learned about it when my brother texted me with a screenshot of a request he received, seemingly from me, with a simple message that said, “hello.” Turns out a bunch of other people got the same message. Many of whom saw my familiar profile photo an engaged “me” in conversation. It was not, however, me with whom they chatted. It was an imposter claiming to be me, and also claiming to need their financial assistance. It’s a scam we’ve all heard about, but one I’d never personally had to deal with.

I did a FB account search for “Tom Griffen” and found two accounts. The real me, and this newly created fake me. Hard to tell the difference. So I sent the fake me a PM and began a conversation. Here’s a screen shot. My words are in blue: 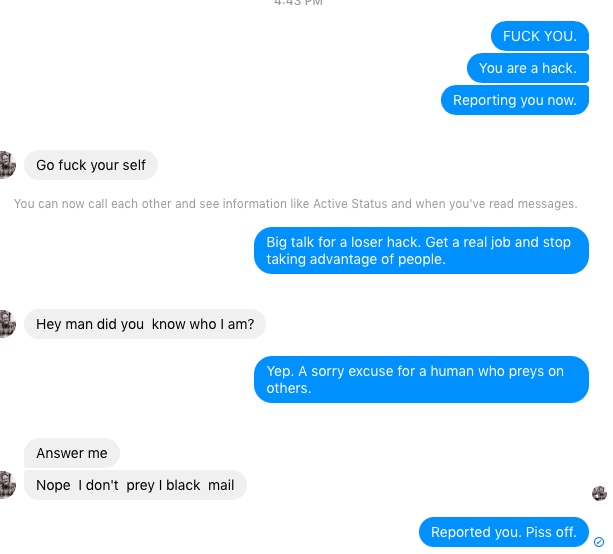 I regret beginning our banter as I did, but I was upset. I felt violated. My heart was racing and I was afraid of what all this meant. In between responses I checked my bank balances, my credit card statement, and figured how to get free access to my credit reports. Safe to say I was freaking out. I reported “me” to Facebook more than half a dozen times, then blocked the fake me from my account. As much as I wanted to dig deeper into this person’s psyche and explore why I was targeted, I knew continuing this chat would only stress me out more. I put it behind me and decided this was the last straw.

Today I published this on my page. Another screen shot:

I’ve already received a handful of addresses for new pen pals, and sideline notes from friends sorry to see me go. I’ve also sensed a strange feeling from some folks who seem bothered by me removing myself from the medium. And I don’t think it’s just me projecting my own concern for leaving a space I’ve occupied for more than ten years. This makes me wonder – is this sort of move witnessed as mildly revolutionary and, thus, something to sneer at? To question because it goes against the grain? Whatever the case, I’ve had enough.

I admit that it is a little contradictory to stay on Instagram given my fear of security and what-not. But for now that’s where I am at. The future will change things. But that’s for me to decide.

To me, Facebook is not a joy. It’s not a delight. If anything, it’s a leash to which I allow myself to remain connected (and for reasons that don’t pass muster). But the prospect of severing ties on 3/22 fills me with glee. So off I go.

If you’ve joined me here in lieu of Facebook, thank you. Plenty more things to come.