I started the shortest day of 2016 at my new favorite local joint—Fruta Editorial. Yesterday when I stopped in for a juice, the employees, Paulina and Arturo, insisted that at some point I try their chilaquitos, a breakfast bowl. Today I did, and chose the Cabra Verde: beans and fried tortilla as the base, then topped with onion, spinach, avocado, cilantro sauce, and goat cheese. The one table in their tiny space, one that’s too small for my knees to fit beneath, which forced me to eat side-saddle, is surrounded by tall shelves of colorful books, all published by independent presses. My second day of wandering began with a meal made with love (that much was obvious) and a literary hug. Exactly what I needed.

I left Roma Norte along Avenida Monterrey to the major traffic circle at Paseo de la Reforma. My first stop was the Ángel de la Independencia, a common symbol of Mexico City and national pride. A 36-meter high column topped with a gold-plated bronze angel. It was created in 1910 to commemorate Mexico’s centennial of independence from Spain. During an earthquake in 1957, the angel came crashing down. The column is set in the circle’s center island and there are no crosswalks for easy access. In order to get a close look, I had to Frogger my way though the chaotic traffic, which has quickly become one of my new Mexican pedestrian skill sets. 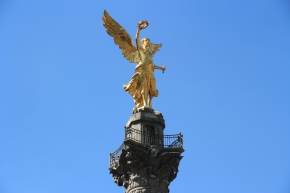 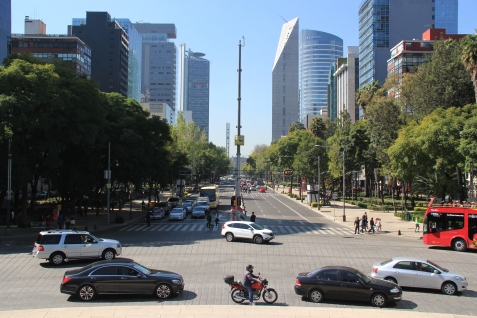 One of the column’s four corners, Peace 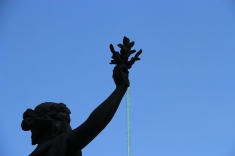 View from the island 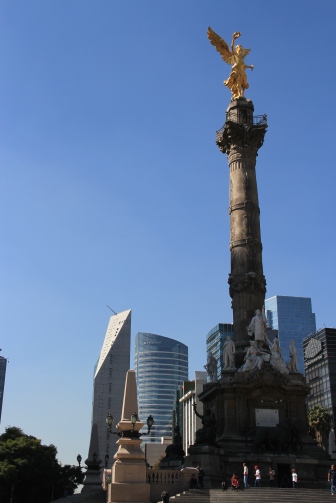 I then followed Reforma to the Bosque de Chapultepec and visited the Museo de Arte Moderno. Had to check my bag with the security guards but remembered to first remove my passport and extra cash. During my February visit to the Museo de Antropología, I neglected to do this and my tourist paranoia got the best of me. I mean seriously…what if? My anxiety made me rush through one of the most amazing archaeological collections in the world. Today as I was handed a claim ticket, I was relaxed and ready to take in the museum’s offerings. Another visitor, also an American, apparently lost her claim ticket. No matter how she pleaded her case, the attendants wouldn’t return her bag. She and her family were freaking out, as anyone would. Bummer. The layout of the Museo was less than classy, but the collections were fun and well worth the 60 pesos (about US$3.00). My favorite room held a dark and twisted collection of Monstruosismos paintings. 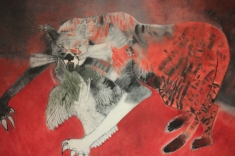 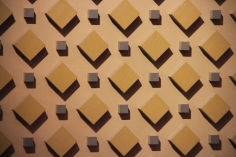 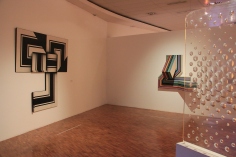 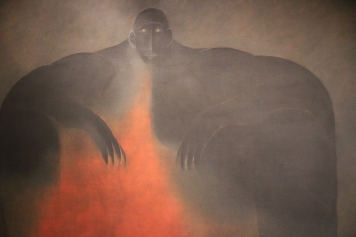 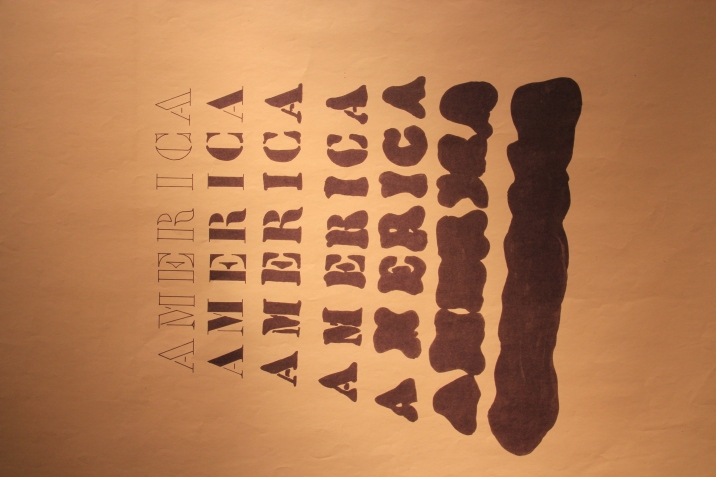 From the museum I retraced my steps out of Chapultepec and back onto Reforma. From afar I caught a woman’s eye who shouted, in English, “Hey, I know you!” I walked towards her, shaking my head, knowing darn well she had mistaken me for someone else. Sure enough, I did know her. For years she was a cashier at Vimala’s Curryblossom Café, my favorite Chapel Hill restaurant. She even remembered what my partner and I always ordered. Kofta curry and samosa chole chaat, vegan. Though this is a wild and random encounter in a city of 20+ million people, I know better than to be too surprised. Back in 2014 while I was walking the Oregon Coast Trail along a barren stretch of beach just north of the Nestucca River, I happened upon a grand total of two people all day. One was from Carrboro. That same year in Tangier, Morocco, I bought some illegal coins from a black market merchant whose daughter lived in Carrboro. This world of ours is riddled with close connections. We only need to pay attention to see it for ourselves. 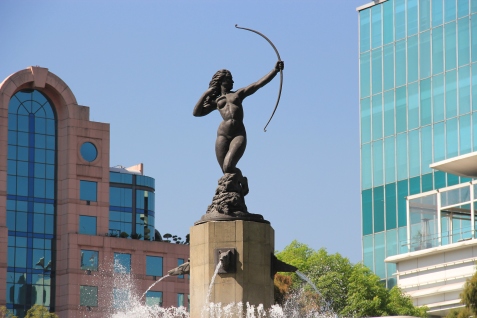 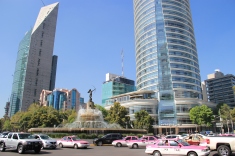 Small mercado near the museum

Looking from Chapultepec towards Angel of Independence

Chapultepec towards the Angel

Outside Museum of Modern Art

The route back into Roma Norte included two espresso stops. The first was a place I found listed as one of the top-five places for specialty coffee in the DF—Buna 42. Frankly, I doubted the list’s credibility since two of its top five are places I have been to, and most definitely would not have included them on any such list. Buna 42, however, was quite lovely. The espresso had a unique flavor and texture. Soft, non-acidic, and creamy. Like the head of a Guinness. I paired it with a galleta which, though it was stale and greasy, teamed up nicely. My second stop (as if I needed another), was a sure bet—Espressarte. One of the most impressive cafés I visited back in February. Espressarte, like my personal favorite, Cardinal, gives a damn about its customers and its coffee. I was a little bummed that they served my double shot in a paper cup, but it still was a fabulous experience. And that’s saying something.

I took a few laps around my block before heading home. I saw a supine motorcyclist, his dropped bike weighing down his legs, wet blood on his arms and chest. He’d just been struck by a pink taxi, the driver leaning against the passenger door talking to a policeman. I kept wandering and found a few more places of visual interest. One, a confectioner’s shop called “Sticky.” Its tag line was Traditional Hand Made Yummy. Reminded me of slogans on t-shirts I see every day around town. Some others: Aren’t U Afraid of the Dark, Long Live American Folk Pilot, and J-A-C-K-E-T centered across the chest and split by the zipper of, as you might expect, a jacket. I had to laugh out loud this afternoon when I saw a grown man wearing a black hoodie that simply said, INTERNET in bold caps emblazoned from arm to arm. These bad translations are meant to resemble western slogans. And I must admit that though they are entertaining, they symbolize a certain degree of international hierarchy. One in which the USA (and maybe the western world, overall) is given way too much credit for its excess. We all might benefit from a collective simplification. 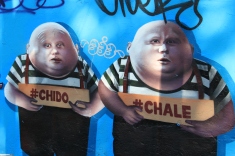 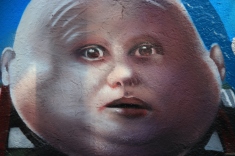 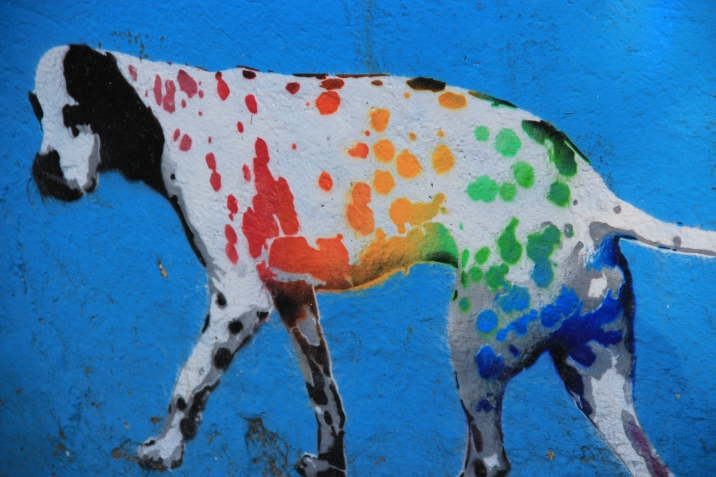