Café Comuna is one of the two coffee vendors at Mercado el Cien. Their placement at the end of one of the two rows likely attracts more action than Café Irecrís, but that’s just a lucky accident. I wanted Comuna to knock my socks off, and maybe my expectations raised the bar unrealistically.

Café Comuna is a collective of sorts, or that’s what I gather anyhow. Beneath their name on the market sign it says, “Cumple los criterios del SEP,” which translates to, “Meets the criteria of the SEP.” I Googled “SEP” to better understand the meaning and only got an acronym for the Mexican Department of Public Education (Secretaría de Educatión Pública). Maybe Comuna has something to do with Education? Which leaves me wondering why the Department of Public Education would have standards for making specialty coffee? Then again, why wouldn’t they?**

Regardless, Comuna’s prices were a bit higher than expected—the difference between 15 and 18 pesos seems much bigger than it actually is, but that’s the psychology of retail. Those extra 3 pesos, equivalent to about 16 cents in the US, altered my perspective. Made me hope for, if not expect more. Made me think I was in for something special.

My order, however, seemed to jumble things a bit. To the degree that I had to confirm that they actually did have espresso and that it was okay to order one. Two folks behind the counter assured me all was well, but their confusion was obvious. Then told me they were out of small paper cups. No problem. I let them know I was fine drinking from a larger cup and suddenly we were in business, sort of, because nobody knew who was making it. They were a little disorganized—and my special feeling was fading fast.

The sole barista must have been on a break or something, because when he showed up not a minute later, everyone sighed and the wheels started turning again. A business mentor once told me to never let my store be one person away from a disaster. Darn good advice.

Soon my shot was pulled and I paid up. I gave the cup a few swirls, then put my entire nose into it to inhale its nuances. Was that chocolate I smelled? A few more deep whiffs confirmed it. Yes, the nose gave off a hint of chocolate. Dark chocolate, no less. Fantastic. I suddenly couldn’t wait to taste it—but when I did, I quickly forgot about that magical cocoa nose. Because though the espresso tasted lovely, it didn’t compare at all to what the nose made me anticipate. The inconsistency between the two details left me in want.

Now don’t misunderstand, Café Comuna’s open air espresso is rock solid. It’s just not the sort that leaves me buzzing or blown away. Frankly, I’d probably be more stoked to drink it as a cup of coffee rather than as an espresso shot. Now that would be a tough cup to beat. One that I’d rant and rave about, no doubt.

**Update: Mercado el Cien sent me a message explaining what SEP is. It’s actually SGP, their Participatory Guarantee System that ensures their vendors are using quality methods of production. Thanks Mercado el Cien! 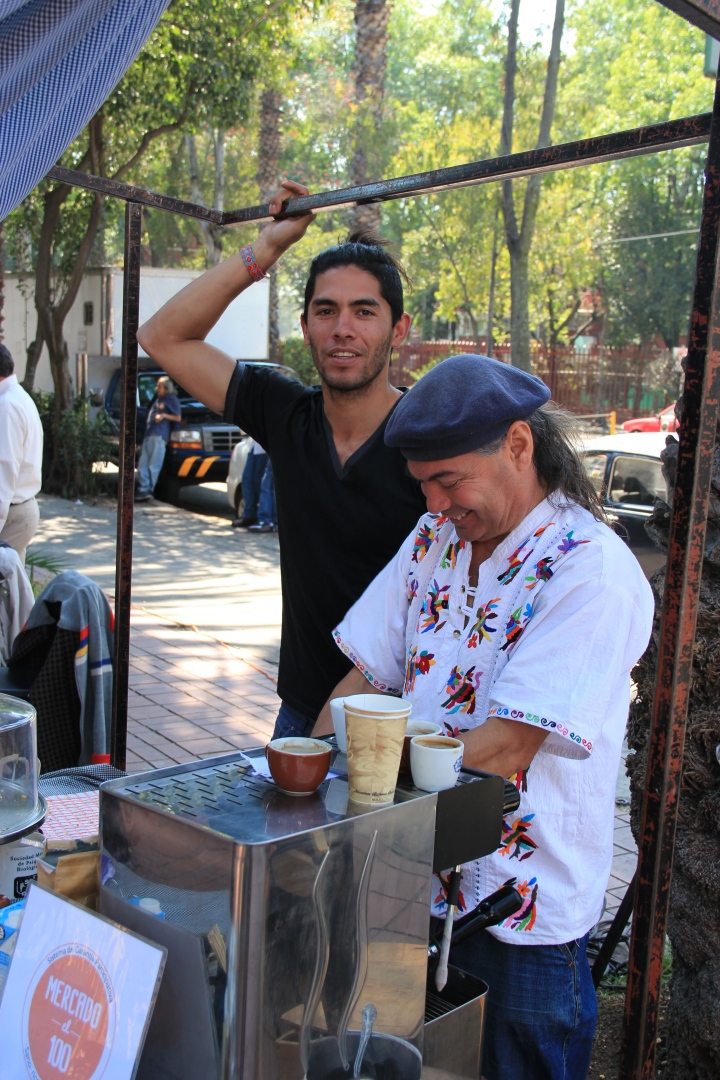