When Katie booked her week-long bike trip through Arizona, I was like, “Hey, I wanna go somewhere too!” So I booked a trip to México. Big surprise.

I hadn’t revisited my book-in-progress since December and my lasting memories of it were largely self-critical. My internal dialogue: There’s no plot. The characters are undeveloped. Why would anyone care about this story? I should throw in the towel. Stuff like that.

But I became inspired to give it another chance after one of my trusted readers, James Lalonde, gave me some usable feedback. His props helped a bunch too.

So off I went. One change of clothes, a couple books for evening reading, and the hope that I’ll be able to watch some March Madness in México City.

David, my Airbnb host and ex-pat from the UK, was a nice fellow. Since I was the first tenant of this rental, he wasn’t too sure what to tell me to expect, etc. He explained how to get use the propane heater to make hot water, what key goes to what (he gave me 3), and other basics. He said the patio didn’t lock and that the next door neighbor will probably go off on me at some point.

Since day one, I’ve done my best to sneak out so as to not encounter her (and haven’t…yet). But I’ve been taking cold showers all week since the gas unit is, um, out of gas. But for $30/night I can deal. 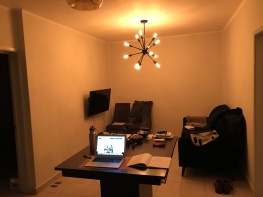 My unit sits between a brewery and a sex shop. Every morning at 7:15 and again at about 8:30, a man enters the main entry hallway and screams “BASURA!!!” like a dozen times. He’s there to pick up trash, but I’ve been using him as an alarm clock.

In less than a week of writing I added 15,000 words and edited nearly 200 pages of existing content. I honestly thought I would have done more, but I ended up needing some time to reenergize, too.

Most of my work was done at Cardinal, Casa de Café – still my favorite place to write even after sampling more than a dozen other coffee houses. Not only is their coffee ridiculously amazing and their ambience relaxed and welcoming, but the three owners, Shak, Alex, and Paul, run a business based on authenticity. Since my first visit (February 2016), I’ve felt right at home here. I have a favorite seat, and nobody minds me sitting there for a long, long time. 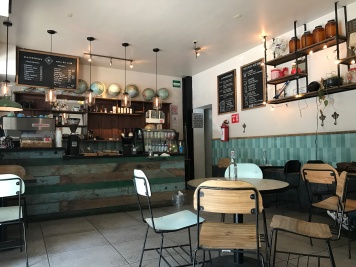 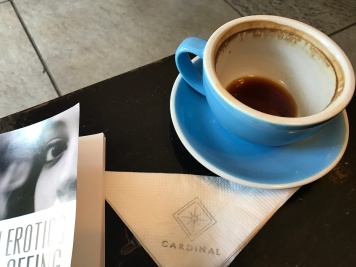 But since I like to mix things up a bit, I’ve also been spending a bunch of time at Cucurucho Café. David and his staff are also super nice, the coffee is wonderful, and the outdoor seating makes for great people-watching.

I tried a couple new places this trip: Panadería Rosetta and Almanegra Café. Both were recommended by Héctor, my Spanish tutor and DF resident.

Héctor also told me that Roma Norte has a bunch of Beat history. While living at Monterrey 122 (cross street, Chihuahua) a drunk/stoned William S. Burroughs played a game of William Tell with his wife, Joan Vollmer. Instead of a bow and arrow, Burroughs used a gun. Instead of placing an apple on her head, Vollmer used a bottle. Instead of hitting the bottle, Burroughs hit his wife. Killed her.

A handful of other beats, including Kerouac and Ginsberg, lived in México City. One of my favorite parks in the neighborhood, Plaza Luis Cabrera, was a common place for them to get high and write.

Got a haircut, too. Omar, my barber at The Strand, is a magician, an artist. This guy can turn my typical middle-aged white dude (receding) hair into something that makes me feel handsome again. I’m not exaggerating when I say I will continue to visit México City for a haircut alone.

I also got a couple new tattoos. The tattooist, Trevore Valensuela (referred by my tutor Héctor), is also a graphic artist and world class musician. He’s played in popular Mexican bands such as Austin TV, and Dolores de Huevos. Coincidentally, Trevore did the soundtrack for a short film directed by a guy I photographed in December as a part of my “Love in Mexico” photography project. In a city of more than 21 million, it’s rather interesting that I’d randomly cross paths with folks connected this way. I took it as a strange validation for the new artwork on my arms. 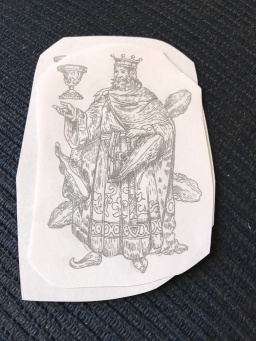 I drank local beer at La Graciela, Taller de Cerveza (directly next door to my flat), had an amazing vegan dinner at Forever Vegano, and bought half a kilo (1.1 pounds) of canela at Mercado de Medellín.

I thought a bit about work and wrote a few blogs about human connection: “What You Do is Your Art” and “You Love When it Happens.”

I thought about my friends’ writings and reviewed their work, too: “Visual Book Review, Part 1,” and “Part 2.”

I also read some great books I found to be both inspiring and enjoyable. Absolutely on Music by Haruki Murakami and Seiji Ozawa, The Stanislavski System by Sonia Moore, and Half Nelson, Full Nelson, a young adult novel by Bruce Stone, owner of the indy theater The Chelsea in Chapel Hill (I interviewed him last month and found his book subsequently in eBay).

México never ceases to impress. Or invigorate. Or make me want to come back.

I foresee another trip here in the not-too-distant future. And not just for the haircut.