I didn’t expect to make it to this café. Didn’t really have time to battle a busy midday Metro. Today was my last day in DF and I had to get to the airport by 4:00pm. And that was preceded by a full schedule including a visit to the National Museum of Anthropology, a stop at Palacio Postal to mail some cards, and a once-over cleaning of my rental flat. I knew I’d be pushing it, but something in my gut knew that Chiquitito would be the perfect final visit. Still, there was huge buzzkill potential.

Small as the café is, I walked right by it. Doubling back I wondered how I could have missed it, especially since I was actively looking for it. It is about the width of a single car garage, maybe twice as long. Both baristas behind the bar, a man and a woman, stopped what they were doing to greet me as I crossed their threshold. Then yes, you guessed it, I ordered a double espresso, para aquí. For here.

Their faces lit up when I told them I planned to blog about my experience. They were down for photos too. While they worked on my shots, I scanned the place. The geometric decor pleased my aesthetic sensibility. It also told me a lot about the café’s personality—clean, organized, helpful, willing to do what needs to be done to make their customers’ lives easier. Yeah, squares and boxes say a lot about a retail space. At Chiquitito there’s a quiet, yet engaging impact on the subconscious. Made me, for one, want to stay a while.

The most prominent design feature is on the wall above the inside seating area—Chiquitito’s vision statement. Part of it reads, “Buscamos conectar, crear y logar. Queremos construir y sea parte del mundo en el que queremos vivir.” The translation: “We seek to connect, create and achieve. We want to build and be part of the world in which we live.” Damn. That’s a good one. I love that it says nothing about coffee. This vagueness is exactly what makes it so powerful. The statement resonates with my own life philosophy, made me feel like these were my people. The fact that they were playing music by The XX certainly helped too.

I took a seat in the shade under the awning, then watched the baristas work. I might be wrong, but it seemed to me that one was training the other. At least once the more experienced one (?) tasted a shot the other pulled, but then restarted the process. Training or not, this attention to detail got its hooks in me. Reinforced their commitment to quality. It also told me a lot about their ability to work as a team. There was so much more going on here than a couple folks making an espresso. I was witnessing mindful life in action.

A third barista brought me my shots and a cup of water. He set it all down gently, making sure everything was set up just right. He made eye contact, smiled, and returned to the back. I wrung my hands together as if to say, now for the fun part.

I raised the cup to my nose, closed my eyes, and drew in the espresso’s warm breath. The smell of baking butter cookies. Warm milk whisking on an electric stove’s simmer. The foam called to mind earthen clay figurines I’d just seen at the museum. Crafted with linked arms, hardened in a kiln, having survived for centuries before zapping millions with a mysterious universal nostalgia. I imagined I was drinking energy, something immortal. I looked back up at Chiquitito’s statement on the wall. “We seek to connect…” That, for sure, was happening.

With the first sip, flavors raced across my tongue, intuitively knowing exactly where to go. The sides of my palate lit up with a warm, yet cooling sensation. This taste applied soft pressure on my racing heart, put my mind at ease. The puzzle in my mind came together. I sank into my chair, felt a ray of sun on my pant leg, and nodded my head to the simplicity of it all. Maybe I even cracked up a little.

The final drops transformed into brownie batter and I nearly swept the veil left on the porcelain walls with my finger. Had to maintain my composure though. Didn’t want the baristas to think that this random dude who speaks poor Spanish and takes their picture (way too many times) was some kind of weirdo. No way. Wouldn’t want that fact out of the bag.

But I figured I’ve got nothing to lose, so I did it anyhow. Except instead of my finger, I just stuck my tongue into the cup and licked it clean. Made sure nobody was looking. Did my best to capture the moment and disappear. Become a part of the world. You know, just doing what their sign says. 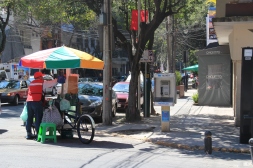 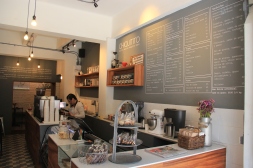 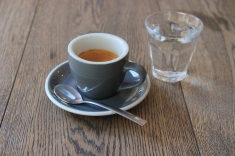 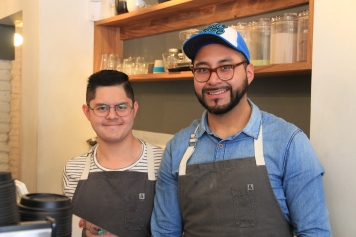 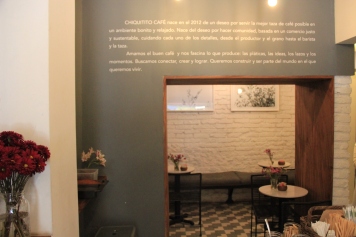