I’ve traveled many times to Mexico, but only to the Baja peninsula. I always sought off-beat destinations: the mud ruins of a Jesuit mission from the 1700s, an island lined with rotting shipwrecks, mysterious cave paintings hidden in high mountain ranges, and deserted beaches where I listened to songs of whales while staring at winter stars. That’s my Mexico.

But as the plane makes its approach into Mexico City and scattered patches of light give way to an illuminated ocean spanning the horizon, I have a feeling this will be different. Just as well, this trip isn’t about adventure. I don’t even plan to leave the Del Valle neighborhood where I’ve booked a flat for the next two weeks. I’ve come here to put myself in a environment that sets my senses on high alert. That’s when I feel most alive, when I am acutely aware of smells and colors and tastes and glances. Of beauty and artwork and language and the refreshing feel of an evening breeze. It’s when my creativity piques, when all that’s familiar turns to magic.

My Airbnb host, Jordi, picks me up from Benito Juárez Airport at midnight. He promptly asks if I wanted the Broncos or Panthers in the Super Bowl. Tells me he’s part of a fantasy league that bets weekly on lines and spreads. Apparently he’s the champ, and he’s bummed Denver pulled it off.

Outside the apartment, Jordi tells me a ridiculously long-winded story about recent guest, a German guy, who befriended a prostitute. Basically the dude didn’t realize she was a hooker and got into a sketchy situation with her pimp. All this to ask me not to allow visitors into the building. Check. Jordi’s thirty-minute tour of my tiny studio makes me wonder if he’s trying to score a tip. When I offer him one, he turns it away, tells me that later in the week he’ll take me to Condesa to party, and I can buy him a drink then. Oh no.

In the morning I walk past two bustling Starbucks before finding a local café where my order, a double espresso, raises the eyebrows of the man behind the counter. A old man wearing a patchwork tweed cap laughs and shakes his fist saying, hombre fuerte, tough guy. Yeah right. I laugh along with him but know that now I’ll be reluctant to order a second. I take a seat in a broken chair on the patio and pretend to be comfortable. Settle in to people-watch with my notebook open.

A man in a red Adidas sweatsuit passes by with a handful of strings connected to hundreds of giant yellow helium balloons. He zigs and zags as he makes his way down the broken sidewalk, pulling and swinging his arm to keep from puncturing his load on low branches and overhangs. His movements are rote, but no less of a dance.

Another man is dressed for the office, briefcase in one hand, badminton racket in the other. Then, two teenage boys. Nondescript except one has a giant stuffed bear strapped to his back, its rear paws torn and dirty from dragging on the ground. I figure the boys are selling something, but there’s no signage, no pushy banter, no attempt to get anyone’s attention.

A garbage truck stops in front of the café. Traditional music blasting. From the vehicle’s flanks hang dozens of giant canvas bags labeled plastico and papel, plastic and paper. The hood is stacked with piles of wood and busted furniture, a few bicycles, half of a toilet bowl. Through an open side door into the truck’s compactor I see one of the crew sitting, lounging, eating a greasy bag of french fries and reading a shredded magazine.

OK, I know this Mexico.

Biggest difference, as far as I can tell, is the dog situation. Never in all my years traveling through Baja have I seen a dog on a leash, let alone wearing a fancy little jacket. I’ve often joked that bad people are reincarnated as Baja dogs, forced to reconcile their previous lives through an unnamable suffering. Barely any food, stale water, and deadly competition with other animals for any form of sustenance. Add to that being pelted with stones by bored locals on the regular. Being a dog in Baja sucks, but in Mexico City it’s pretty luxe.

As I sip the last of my espresso, a poodle in a pink outfit pulls away from its companion to sniff my leg. The owner, a woman with big sunglasses and rosy fingernails pauses too, extends her arm to let the dog do as it pleases. I scratch the dog’s curly head and it sits at my feet, looking up. The woman says she likes me, the dog, that is. I ask its name, her answer sounds like Maté, which makes me want another espresso. So I get up and order it. And when I do, the old man in the hat shakes his head and cracks up, says something I can’t quite make out. 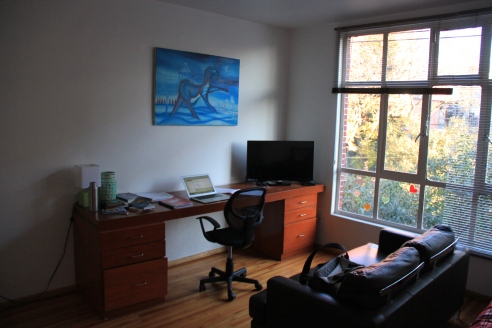 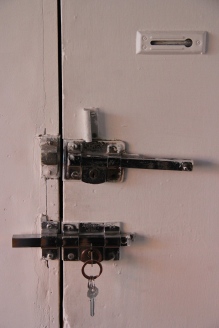 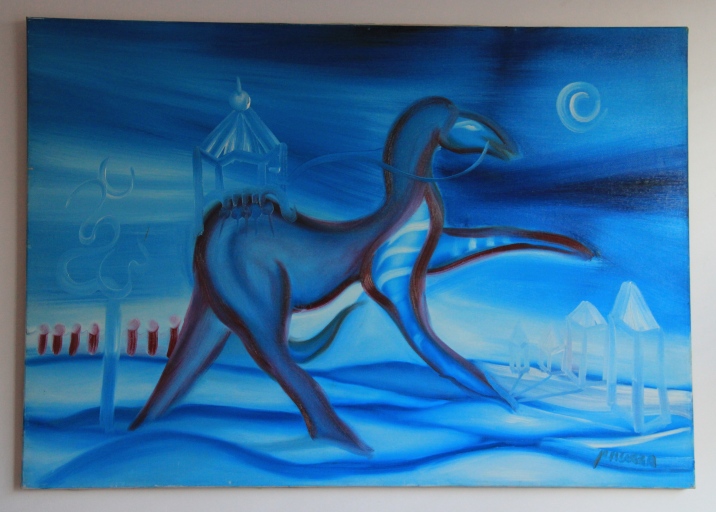 Detail of artwork above desk