In Fez I walked past many late-night hair salons. Every shop I passed was booming with business even when everything else was closed. Men sat in the chairs getting the sort of treatment I remember my grandfathers talking about—straight razors, eyebrow edging, and slaps of aftershave all while discussing the day’s headlines and talking shit. I felt an unearned nostalgia for such an experience and considered giving it a try. But fact was I didn’t really need a haircut, not yet anyhow, and I certainly didn’t want to trim my beard. So, just as I did with most cafés, I walked by wishing I had the guts to just bust in and pretend I had a clue what I was doing. Until then, I’d continue window shopping.

After walking past the same place a few nights in a row, a barber approached me after the local rush. It was 10 p.m. and I was headed back to my hotel after a jam session at Café Clock. He seemed nice and not too pushy. Like he genuinely wanted to improve my physical appearance. Our exchange was part Spanish, part English, but mostly hand gestures. I gave him the green light to number one my head, then gestured to my beard and shook my head. I didn’t want him to mess with it.

He and his partner saddled me up. One draped the smock across my chest and legs while the other tucked tissue paper beneath its neckline. One plugged in the electric clipper, tested it, and oiled the blades while the other stood with his hands out, waiting like a surgeon. After the passing of the clippers, the barber examined my head then started in on the job at hand. He moved like a dancer, exaggerating the upward movement of his arm after shaving my head from one horizon to the other. He’d shift his weight from side to side, his hand on his hip and nose held high. He moved like a bullfighter, turning my simple buzz into high art with his élan.

After my head was sculpted, the barber’s partner stepped up for the finish work. His choreographed sharpening of the straight edge and mixing of shaving cream was seamless and captivating. He generously applied the foam to my neck, cleaning things up without as much as a nick. When he started looking closely at my beard, I again told him no thank you. With the razor at eye-level, he shook his head and said, “Just a little, sir. Relax. You will like.” Rather than put up a fight, I exhaled into the chair and closed my eyes. When all was said and done my beard was gone. I looked like my 25-year old self. I looked like my dad.

The next day I surprised myself when I looked in the mirror. And though I’m not a fan of a clean-shaven face, it certainly felt good. My skin was smooth and refreshed still smelled like the cologne the barber patted on me. A hint of lemon, perhaps? I packed up my bags to catch the train to Marrakech then hit an ATM for more dirham. Nearby was a man with a shoe shine box. Yep, I gave that a go too. My baby-soft cheeks and shiny boots rejuvenated me and provided just enough confusing juxtaposition for the backpack I was lugging. A local even asked me if I lived in Fez. “No sir,” I said, “but I’d consider it.” 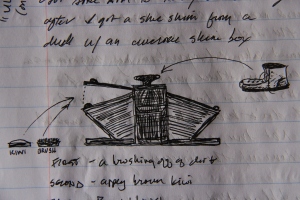