I arrived in Volubilis at 8am. The heavy Mediterranean fog mixed with smoke from brick factories shrouded the ghostly columns on distant hilltops. Not until I was about to leave did the clouds finally burn off and offer a panoramic view of the 2300 year old ruined city that once housed more than 20,000 people. The sun brought to life intricate bath mosaics and mythological artwork. From a high point, the urban layout was obvious—an arched main entrance merged into a long stretch for commerce and trade which fed into a neighborhood of modest, and then pretentious structures. Though only 1/3 of the site had been excavated, it was clear that wealthier citizens lived strategically sealed off from the others. Seems little has changed through history.

My guide, Abdul, was a blue-eyed, brown-haired Moroccan who could trace his roots to the Roman conquest. He pointed to a cut in the valley below Volubilis and said his family’s been farming there for more than two millennia. He assured me that the French archaeologists who “discovered” the ruins helped themselves to treasures from the rubble. Original texts describe golden bowls and coins, none of which are in any Moroccan museum. He said these items are now in the Louvre (he pronounced it, “Lou-ver”) but labeled with incorrect provenances. As Abdul explained these facts, his voice got loud and white spittle formed on the edges of his mouth. He kneaded his hands as he apologized for getting himself all worked up.

Later that day I visited the whitewashed town of Moulay Idriss. It’s named for the great-grandson of the Prophet Mohammed. The town is an important pilgrimage site and was closed to non-Muslims until the mid-20th century. As I wandered the vendor-rich streets and watched the bustle of a day unfold, I was overcome with nostalgia. I bought a pink and yellow chunk of honey candy and sat down to share it with two toothless men draped in brown djellabas. Sometimes nodding and chewing says more than words could ever convey.

It was Friday, the weekly holy day, so back in Mekenes I asked around for a suggestion on where I could get good couscous. The place everyone recommended was an unmarked restaurant where, upon entering, I felt like I was in someone’s living room. I sat alone in an overflowing dining area and dug into my heaping serving. Afterwards, I opened the menu and asked the waiter to help me choose a dessert. I’d been previously impressed by the delicious simplicity of sliced oranges sprinkled with cinnamon but thought I’d try something different for a change. He first pointed to a photo of a fruit plate, then to the coconut macaroons, and then to some sort of mystery pudding. I just nodded and closed the menu. For a moment he looked at me, but then he got my gist, grinned and nodded back. I figured, what the hell, when in Rome… 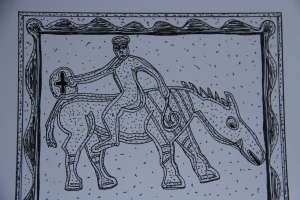