Before I left for Morocco, my buddy Scotty and I chatted at length about Tangier’s influence on literature and art. Famous Beat writers such as Burroughs, Bowles, Ginsberg, Kerouac and Corso all either visited or resided in Tangier in the late 50s and early 60s. Bowles’ famous work on Tangier’s dark side, Let It Come Down, attracted Burroughs to North Africa – and when Kerouac followed and found his pal’s apartment littered with unpublished pages he encouraged him to compile them into a book that he recommended be titled, Naked Lunch.

The city’s exotic allure was likely made more attractive by its liberal policies and unenforced rules on drug use. The Tangerine scene remains a desirable destination for folks on the periphery, though thanks to the notoriety of the Beats, its a giant tourist trap as well. I’m a sucker for history, and even more so if it’s a history I feel attached to. I wanted to stay in the hotel where Burroughs wrote his famous novel. Or where Bowles hung out. But the chatty taxi driver insisted I’d be more comfortable at a place owned by his pal, Abdul. I rolled with it and settled in for a few days.

I wrote this in my journal: “My mind is unbalanced. I’m dangling between the me I know (or think I know) and the me that is sitting in Tangier, Morocco right now. I’m reading about the literary influence this place had on the world while also reading a piece by my MFA buddy, James. I want to write. I want to plug into this place. I dreamed last night that I was lost and trying to find a place to sit down. I should go find one.”

So I did. First I stopped at the Librarie de Colonnes on Ave Pasteur and browsed their English language collection of post-war literature. Then I headed to the Plaza de France and took an outdoor table at the Gran Cafe de Paris. I pretended to be sitting in Burroughs’ favorite seat, taking in his view of the French consulate. I busted open my notebook and began writing with abandon. I drank my first cup of Moroccan mint tea and munched on almond pastries. Kids asked for money and I shooed them away like a local. It could have been 1960 all over again. It could have been the beginning of something big. 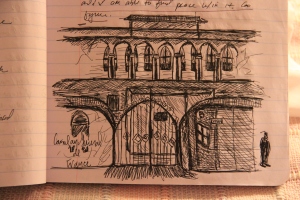 The view from Cafe Gran de paris – the French Consulate in Tangier.

2 thoughts on “A Month in Morocco: Tangier’s Literary Scene”