The rain last night drowned out the sound of the ocean.  Made me quit thinking about sneaker waves and tsunamis and wonder when it would all stop.  Soothing for the most part, an occasional downpour turned the rainfly into a snare drum which snapped me awake to think about the (wet) hike ahead.  These moments were short lived.  I was too tired to worry.

By 7AM it was eerily quiet.  I unzipped the tent and saw a full rainbow stretching over the ocean.  It stayed as I broke camp until the blue sky swallowed it completely.  I left some artwork behind then head out on the sand, still solid from the night’s rain.

Today I’d hit the Elk and Sixes Rivers.  And I can’t lie, this frightened me.  I’m pretty much afraid of water.  The trail guide says, “rivers crossable at low-tide.”  Too bad I didn’t know when that was.  When I hit the Elk, I hiked up my shorts, took off my shoes, and buzzed across, no problem.  Next stop was the Cape Blanco lighthouse where I took a lunch break and chatted with only two of the at least fifty folks who waddled past me from their RVs to the visitor’s center.  I think I intimidate the snow bunny crowd.  Plus, I’m starting to stink.

The exception was Mack from South Texas who was rolling through Oregon with his wife Wendy.  They live in a clothing-optional community and flee to Oregon when the weather gets too hot in the desert.  They move from State Park to State Park in their bus-sized “Bounder” and volunteer as docents for a month at a time.  Mack referred to himself as a “horse guy.”  He and Wendy collect nude art.  Mack kept commenting on my legs and even called his wife over to check me out.  “Oooohhh,” she said.  “Nice!”  He and I passed the time while Wendy went up the lighthouse.  After I’d been there an hour, a ranger told me that if I am heading north, I better get going since high tide was coming in and I still needed to cross the Sixes River, two miles up trail.  He said it shouldn’t be a problem to get across.

The Sixes river is not wide, but it is deep.  At high tide even deeper.  The current is fast and strong and by the time I got there it was in full force.  My shitty cell phone had roaming reception so I got Katie on the line.  She said low tide was in five hours.  So I sat on a driftwood log until I could ford without getting my neck wet, about four hours later.  And even then it was pretty sketchy.  Though my predicament was kind of frustrating, I think it was necessary.  It slowed me down.  Stopped me even.  Gave me a chance to reflect on all that had happened in my short four days.  I took it as part of my reset and waited it out with a chuckle.

Once across, and after a 20-second celebration that scared a few gulls, I walked for a couple more hours to Blacklock Point.  The OCT turns into a dreamy, canopied single track and meanders for four bush-wacking miles or so, passing Flora Lake to the east.  As it spit me back out to the beach it was already 7:00PM.  I decided to walk until 8:00.  But my plan was interrupted.

I noticed a large fin in the breaking waves and assumed it was a dolphin or porpoise.  Then I saw a telltale, big fish “footprint” – a still patch of water that is left on the surface when they submerge.  Then I saw more than just one.  Three grey whales, in fact, were tumbling in the surf line, exposing their fins and tails.  When they’d occasionally poke their heads up, I’d dance around on the beach and wave my arms at them.  I was certain they were checking me out like I was checking them.  I watched them for more than 45 minutes and took their show as a sign that I should camp there.  So I did.  Not a big mile day, probably only 15.  But definitely a day that started and ended with unforgettable gifts.

Another art piece left behind

The north side of the Sixes River 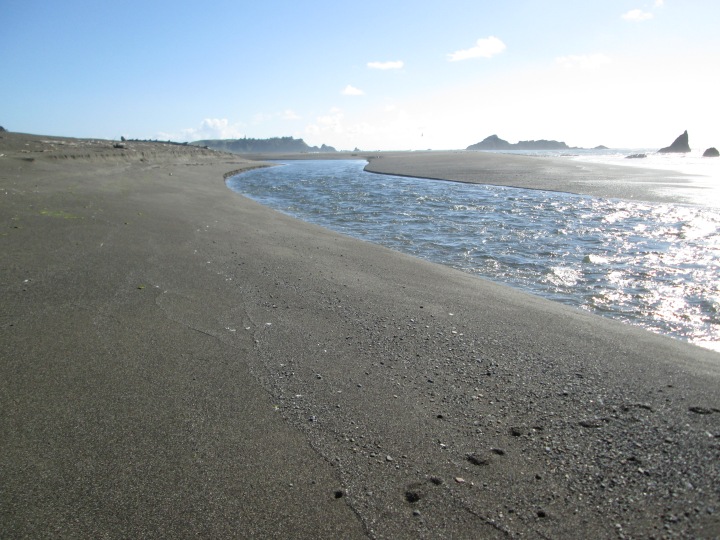 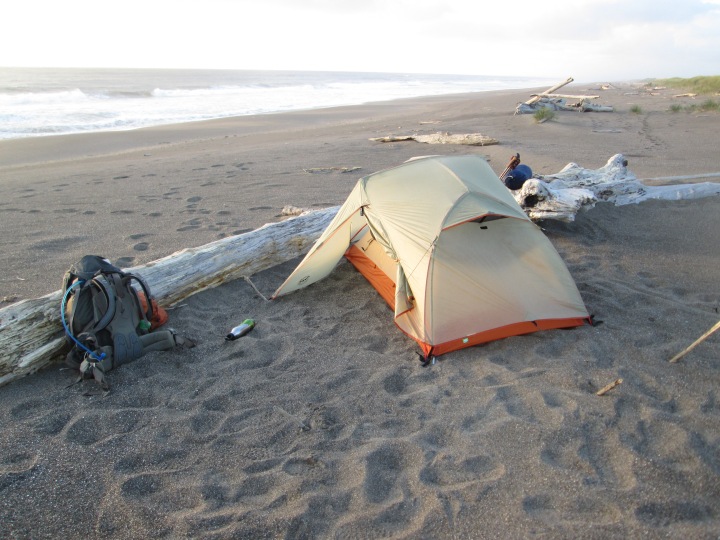